When, last winter, I became aware for the first time of quesabirria, I started trying and trying to think of the thermal angle we could find to justify cooking these remarkable tacos for the blog. So boy howdy was I happy when I came across a great recipe from Smokedbbqsource.com that, while not being strictly authentic, did include some great thermal thinking and even some doneness temperatures!

So we made them, and now we have a new favorite kind of taco. Let’s take a look.

What are birria tacos? What is quesabirria?

Birria tacos (called simply quesabirria in Mexico) are a relatively new addition to the great canon of Mexican street foods, and one I’m delighted has caught on. First, let’s start with what birria is—a richly seasoned meat stew, often made with fatty cuts of meat. 3 The liquid from the stew is called consommé (as are many broths in Mexican cuisine). When making birria, the fat that renders from the meat rises to the top of the consommé, forming a clear, red layer on the surface of the stew. This is essential for what follows!

For quesabirra, a tortilla is dipped through the layer of liquid fat that accumulates on top of the stew and into the stew liquid, coating it in red, seasoned beef fat. It is then filled with shredded cheese and the shredded beef from the birria itself, folded over to make a classic taco shape, and then fried on both sides. The result is a taco that is gooey-cheesy, savory, messy, fatty, crisp, and beyond delicious.

You can serve them with a cup of the consommé alongside, for dipping purposes. (Though the consommé we’ll be making here is too thick and rich for sipping, you could water it down to a more broth-like consistency.) But really what you want is some salsa, cilantro, onion, and fresh lime wedges. To maximize your enjoyment, we’ve included a killer recipe for salsa in the recipe below that you can easily make while the meat is cooking.

Smoking the meat for birria tacos

As you know, I’m not one to stickle for authenticity, and my inclination to play with food in a fun cross-cultural manner is strong. So you can imagine how happy I was to find a recipe for quesabirria that included BBQ and smoke-braising in the technique!

By first seasoning then smoking beef chuck 4 before braising it, we get more layers of flavor. Cut the chuck into three-inch chunks to increase their surface area, seasoning ratio, and cooking speed, all of which are good things.

Now hold on there. Did I say about 203°F (95°C)? What about our obsession with accuracy? Well, as you may remember from other blog posts, collagen dissolution is dependent not on temperature alone, but on temperature and time. Getting these cubes of meat up to temp as quickly as we do doesn’t give them enough time in the collagen-melt-zone to fully tenderize. It may take more time before the meat becomes shreddable. We use a Smoke X2™ to keep an eye on the temps so that we can know when to check the beef for tenderness. Once it gets to 203°F (95°C), we can probe it with a Thermapen®. Our cubes were still feeling tight when our alarm sounded, so we reset it for 2 degrees higher and let them ride a bit longer.

In the end, it took about 90 minutes to smoke the meat then about 2 hours to braise it up to both temp and tenderness. We made the consommé during the initial smoke, and that saved some time, but this is far from a “weeknight meal.” That being said, you could easily smoke and braise the beef and even shred the beef then save the ingredients for the next day, or even a few days later. When dinnertime comes, warm the consommé and the meat and assemble the tacos on your griddle.

Yes, the ingredients list is long; but those are almost all just spices you might already have in your cupboard. Yes, there are lots of steps, but none of them is difficult. And with the right tools, there are certainly no thermal difficulties! Make these. You’ll have a new favorite taco.

For the tacos themselves 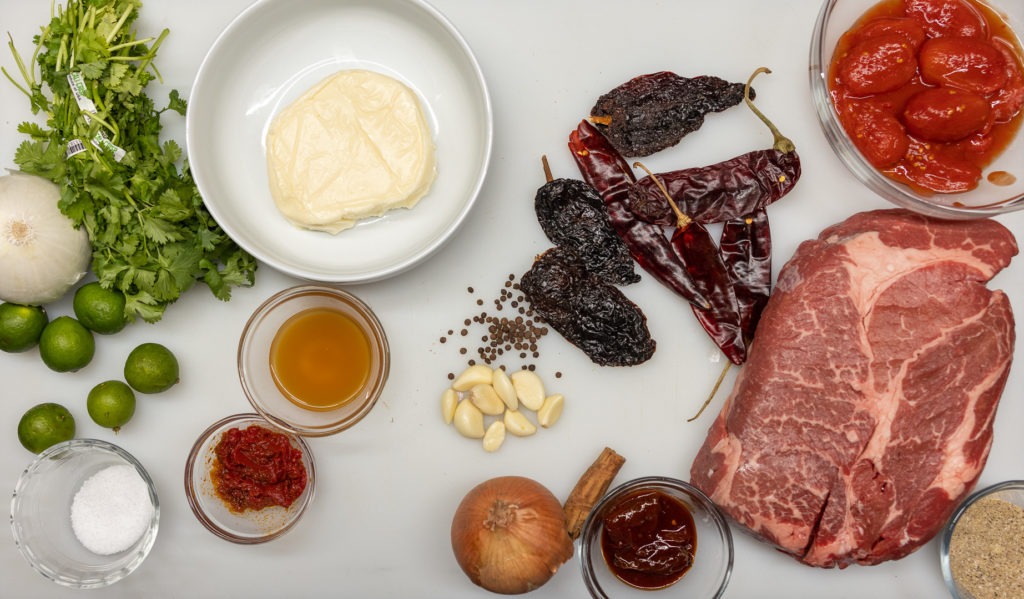 First, get the meat smoking

In the meantime, make the consommé 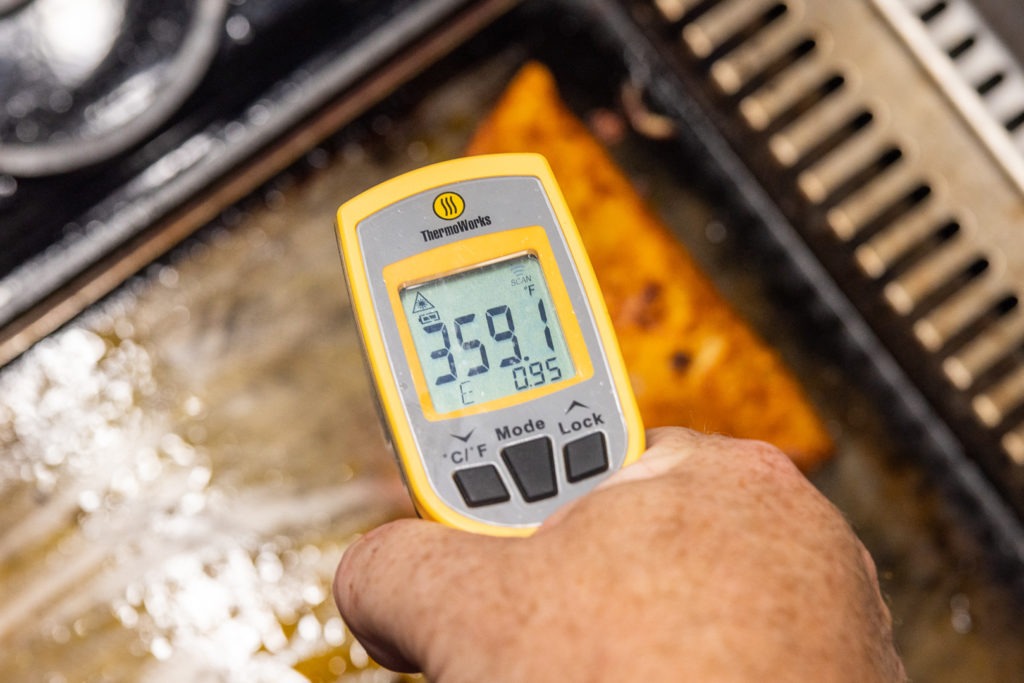 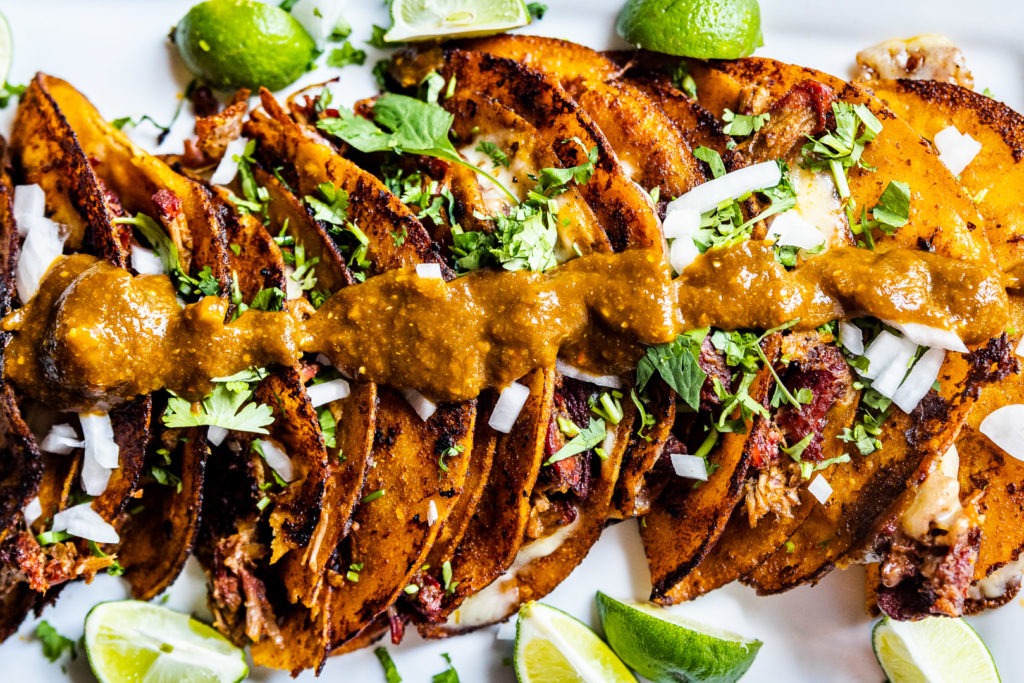 Though you can use any salsa you like for these tacos, we find that this version works particularly well with them. And it’s incredibly easy to make, so that’s nice. 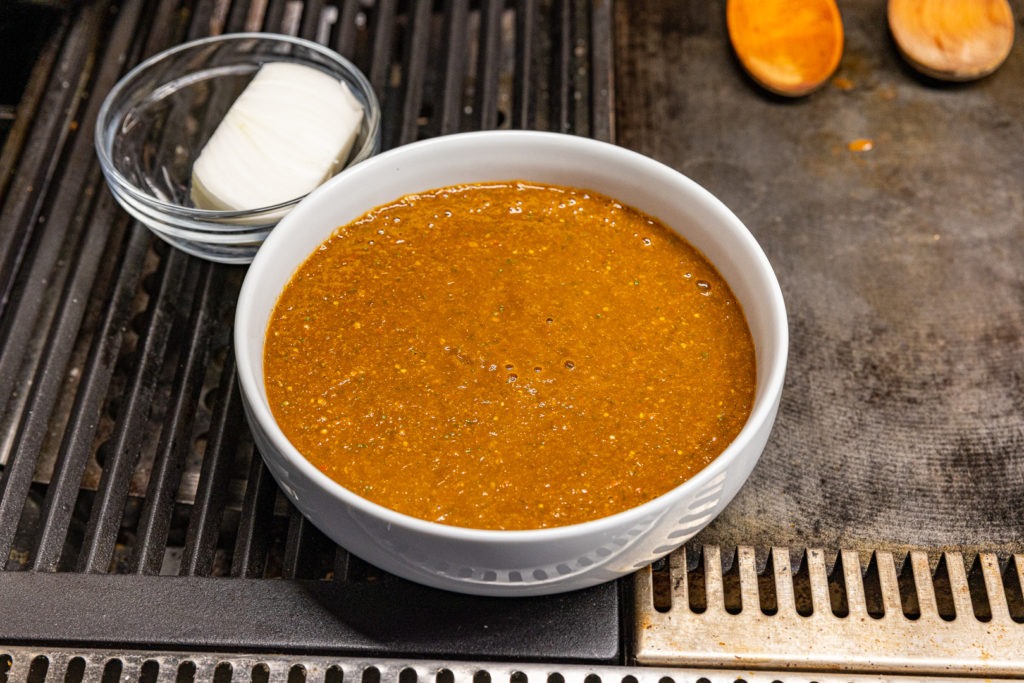 This recipe makes well more than you’ll need for the tacos, and you’ll be glad. Get a bag of tortilla chips and go to town.