If you’re a meat-crazed cholester-fiend, have we got a meal for you! Not that you haven’t heard of it already, but there is a meatstraveganza out there called a “Fatty,” and we’re going to teach you how to make one that is safe to eat (at least from a non-blood-pressure-related point of view) and tasty.

Fatties have taken the BBQ world by storm in the last few years, with new flavors and types being devised and tried all the time. We’ll show you one of our favorites, the Green Chile Pork Fatty from Hey Grill Hey, and talk about the importance of temperature in making one of these delicious beasts. Grab your Smoke ™ and get cooking!

The current notion of a BBQ Fatty seems to have evolved from the practice of smoking a roll of breakfast sausage (often coated with BBQ rub). Later, the roll was stuffed, most often with cheese, and then, sometime around 2008, someone wrapped it in a weave of bacon, and the modern Fatty was born. Though the flavors and combinations may vary, the basic structure of a fatty is pretty much always the same: It’s a sausage (or sometimes ground beef) loaf that is stuffed with cheese, wrapped in bacon, and smoked to rendered, amber-colored perfection.

So I guess I’m saying that it isn’t health food.

But it is a great canvas onto which to paint your wildest culinary fantasies. Make one that’s seasoned with red curry paste. Make one with chorizo instead of breakfast sausage. Heck, go full breakfast and mix some maple syrup into a cream cheese filling and stuff some pre-cooked hash browns in there. Go for it. But no matter how you stuff it there is something important to remember: only proper temperatures will make this monster edible. 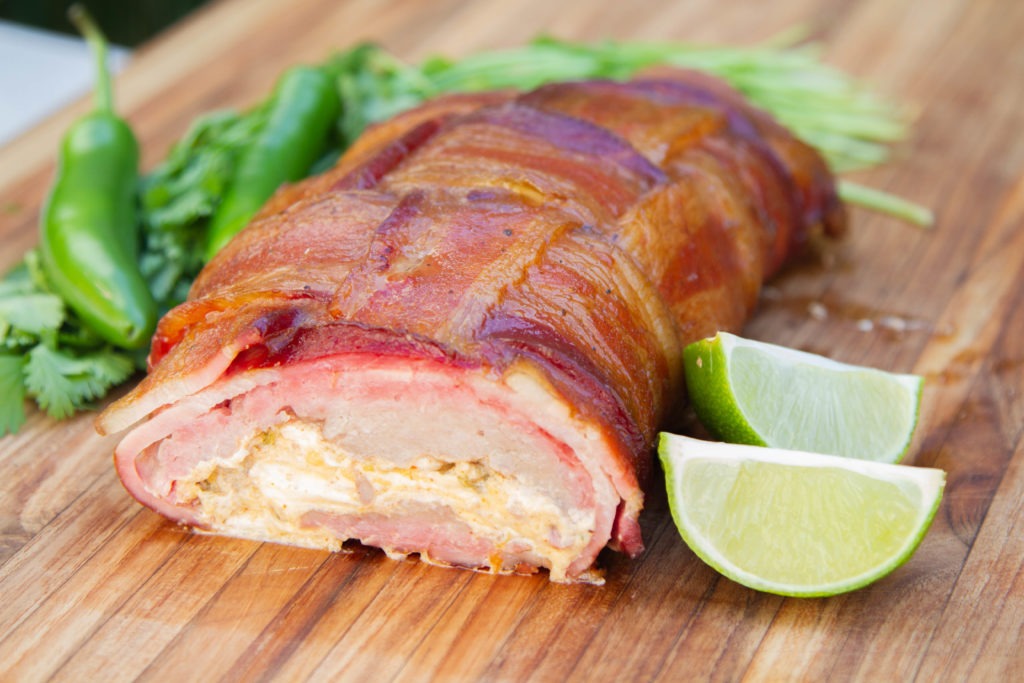 The Fatty presents an interesting thermal space. Usually we talk about gradients of heat and their movement toward the center, but in this case, we have gradients of meat as well. The bacon on the outside has one set of thermal properties, the sausage within another, and the cheesy center a third set of thermals.

It is tempting to think of the cheese as edible—that needn’t be fully cooked by virtue of its already-safe-and-tasty starting form. You may want to just cook the sausage to temp and call it good! But. That cheese has been layered on and rolled together with a bed of raw sausage. This means we must treat the cheese with the same kind of “bacteria must die” attitude that we treat the rest of the meat: the cheese must be cooked to a safe temperature of 165°F (74°C). This is right in line with the reasons to not stuff a turkey—the insides must get fully cooked to counteract any contact/raw juices from the uncooked meat in order to render them safe for consumption. We suggest a high-quality leave-in probe like the Smoke to monitor the internal temp of the Fatty as it cooks.

And speaking of rendering things safe, let’s talk about the bacon here. The bacon weave (see below) should be made of bacon that is neither too thick (which will be tough) nor too thin (which will just not hold the whole thing together). And in order to make it most palatable, it should become well rendered, constantly basting itself in its own fat as it cooks. In order to not over-crisp the bacon as you wait for the temperature of the cheese to reach your target, cook the Fatty at a nice medium temperature of 275°F (135°C) on your smoker. Again, the Smoke, with its two channels, is a great tool here, because you can monitor the air temp of your smoker while also keeping an eye on the Fatty—all without ever having to open the lid to your smoker.

How to make a bacon weave

Making a bacon mat is one of those fun cookery activities that return quick and easy yet impressive results. Maybe it’s not super useful outside this application, but it sure is impressive here!

To make your weave:

This BBQ chimera is a mega-rich center-of-plate crowd pleaser that will secure your reputation as a master of meat. And when you use high-precision ThermoWorks thermometers like the Smoke and Thermapen you will get it right time after time, no matter the weather or the smoker. Give it a try!