New Year’s Eve is a time for opulence. Few holidays, if any, excuse such lavish excess as does the turning of the calendar. If you want to celebrate in luxury, we would like to recommend that you try cooking up some lobster Thermidor. (But then of course we would, right? Lobster Thermidor would be the lobster dish of choice at ThermoWorks!)

This ultra-rich lobster dish is a great way to ring in the new year before you tighten both your belt and your purse strings. It’s warm, it’s beautiful to present, and with our temperature advice, it’s easy to get right. Let’s jump in and take a look!

What is lobster Thermidor?

The dish is named for the (now defunct) French month of Thermidor, and the events of the French revolution that happened during that month. Thermidor was so-called because it was the month of the summer’s greatest heat, a fact which ultimately, and perhaps sadly, has nothing to do with the dish that took its name.

Whatever the etymology of the dish, the fact remains that it is composed of lobster meat that is chopped, mixed with a rich sauce of wine, cheese, and other seasonings, stuffed back into its shell, and baked until browned.

It is, in its own way, the crustacean version of a twice-baked potato. Or perhaps lobster fondue on the half shell. But comparison or genre-pigeonholing isn’t necessary here. Lobster Thermidor is lobster Thermidor and needs no “this food is like” explanation!

While the dish is often made with whole lobster, it works just as well with lobster tails. We got ours from LobsterAnywhere, and decided to double the recipe, making eight halves. It was a lot of food! The dish is so rich that one tail easily feeds two people.

To make the Thermidor, you need to have cooked lobster. The best way to cook the lobster tails for this dish is to steam them until they reach an internal temperature of 140°F (60°C). At this temperature, the meat is cooked, the mushifying enzymes are deactivated, but the meat has not crossed over into rubberiness.

To nail that temperature, stick a waterproof needle probe in between some of the plates of the lobster tail so that the tip of the needle is in the thickest part of the meat, close to the front of the tail. Then set the high-temp alarm on your Smoke X2™ (or other alarm thermometer) to 140°F (60°C). Heat your steamer and put the tail in. We used two needle probes because we were cooking tails of two sizes, large and jumbo. The large obviously finished first, with the jumbos coming in a couple minutes later.

What is the doneness temperature for lobster?

To put the final touch on this crazy creation, it is sprinkled with parmesan cheese and browned in the oven. The shells are stuffed while the filling is still warm/hot, so there’s not through-heating that needs to be done. All we need to get a little color and toastiness on the exposed stuffing. While you could use a broiler, they often invite accidental overcooking. You can get excellent results by baking the stuffed tails in a hot 425°F (218°C) oven for about 10 minutes.

As you embark on the new year, we wish you the very best: the best food, the best company, and the best health. This dish will be a great one with which to ring in the new year, and it will be all the better for cooking it to the perfect temperature. Give it a shot and share it with those you love.

Until then, Happy cooking!

Lobster Thermidor, adapted from the recipe provided by LobsterAnywhere. 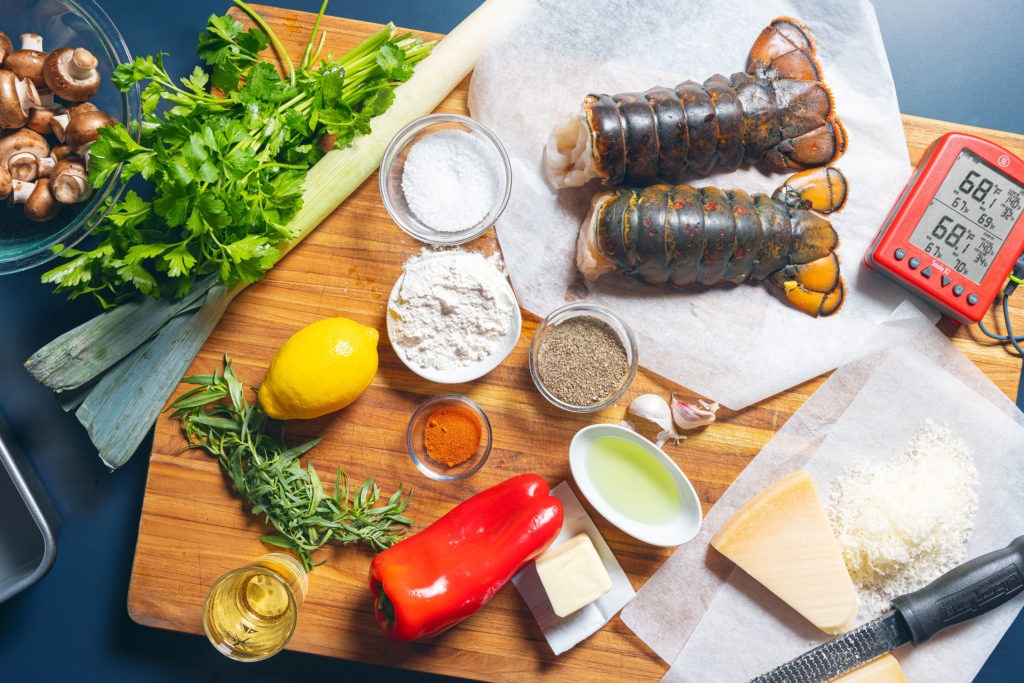 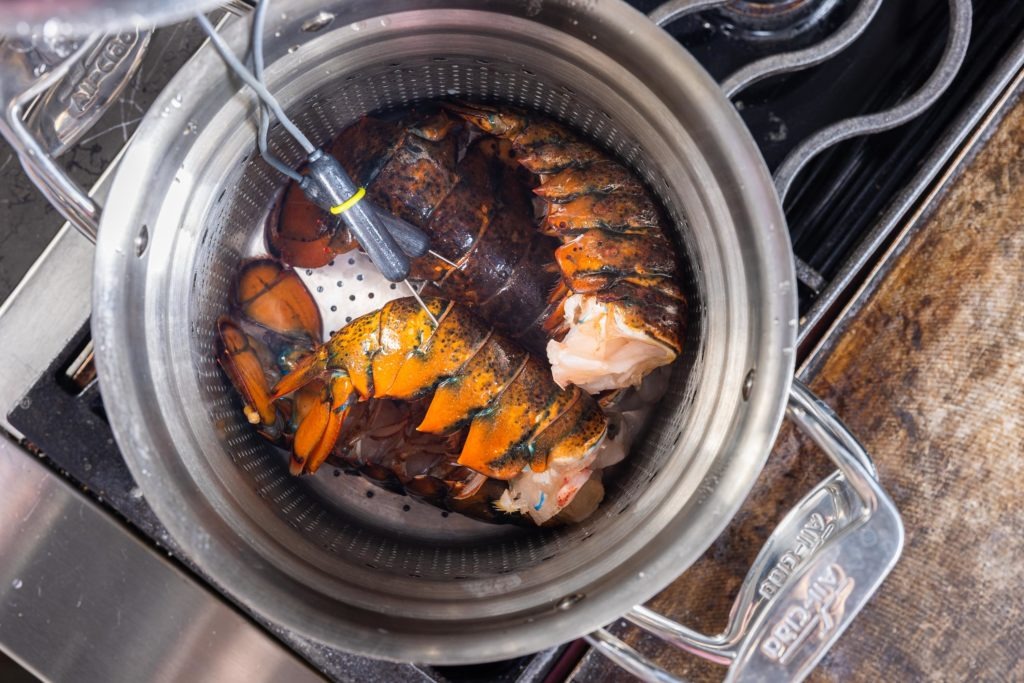 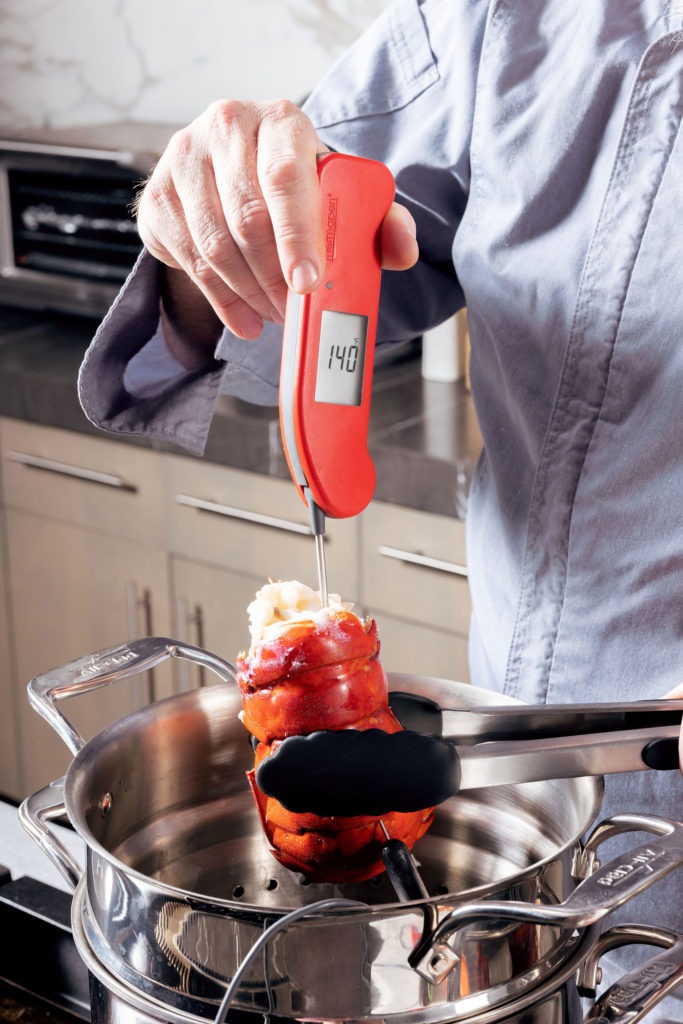 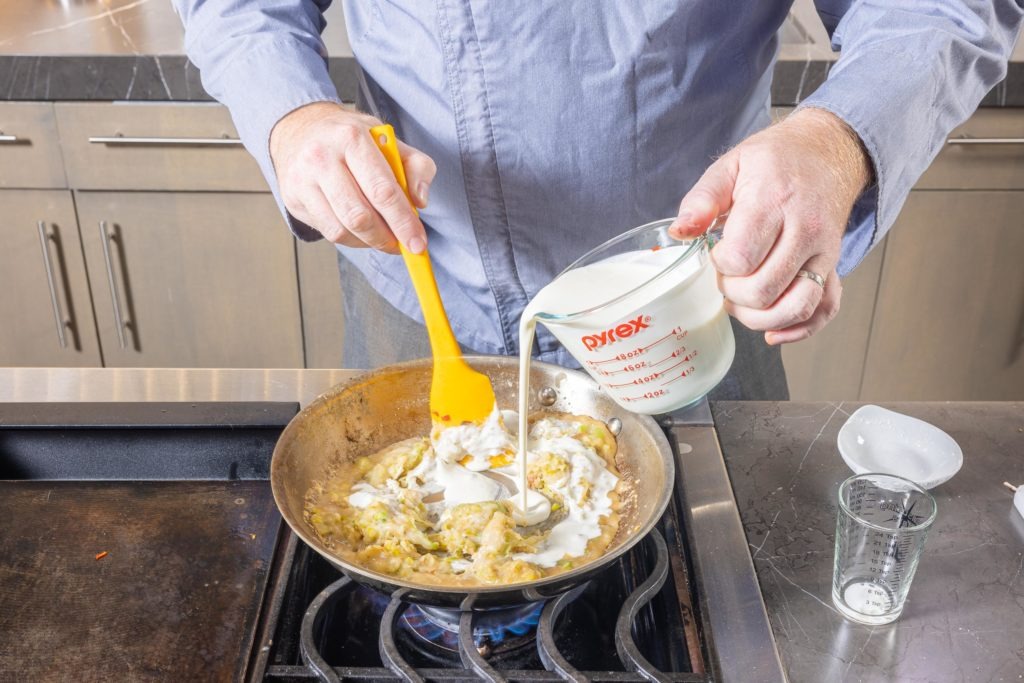 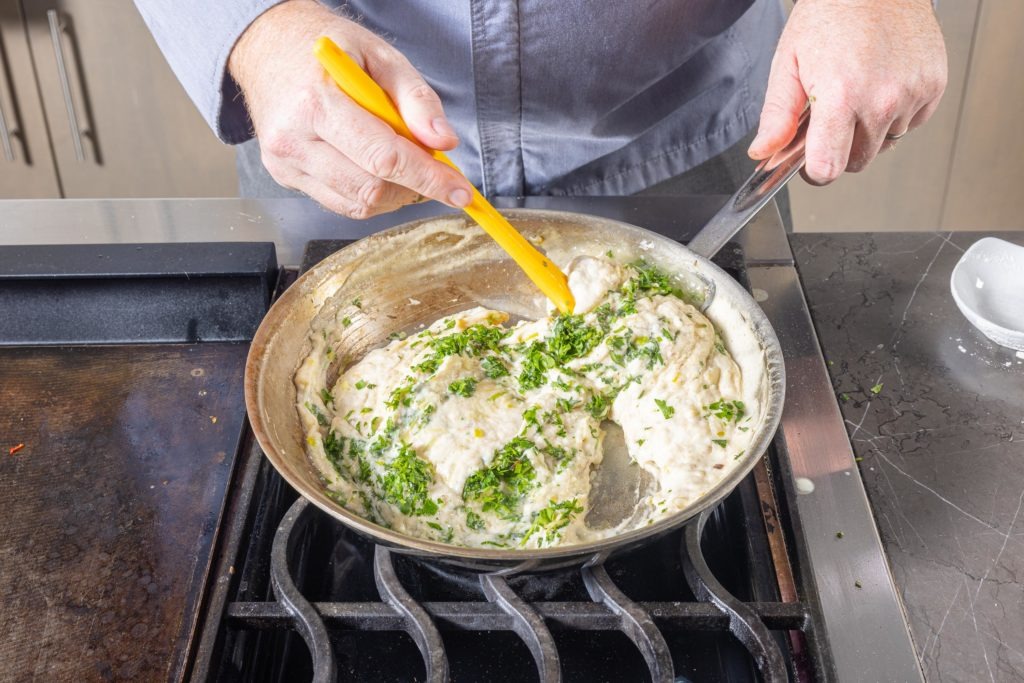 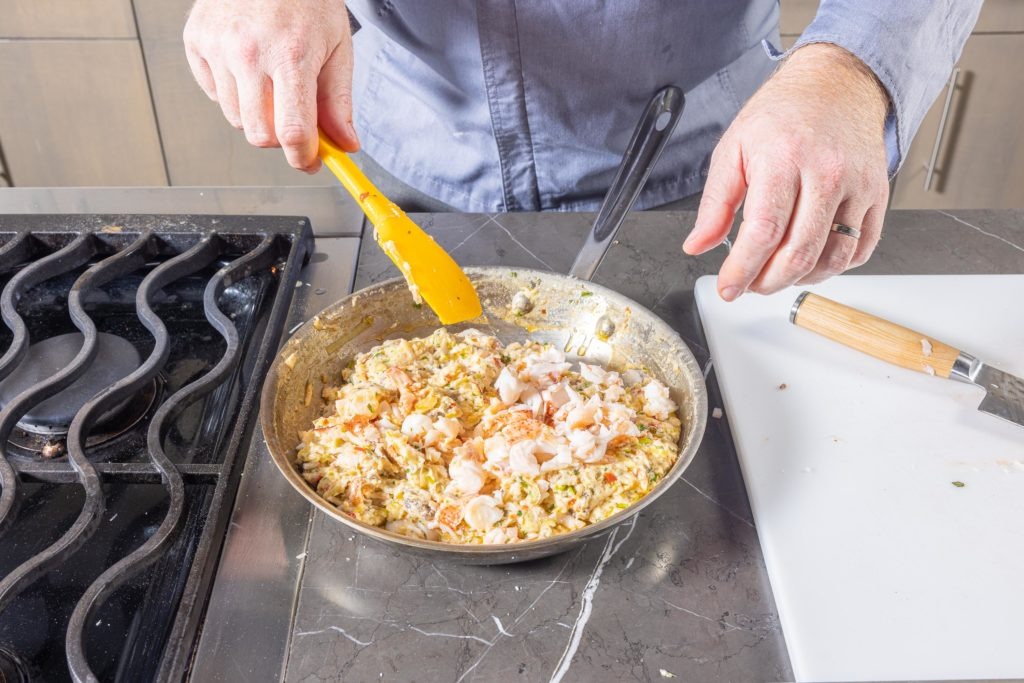 Stuff the tails and bake 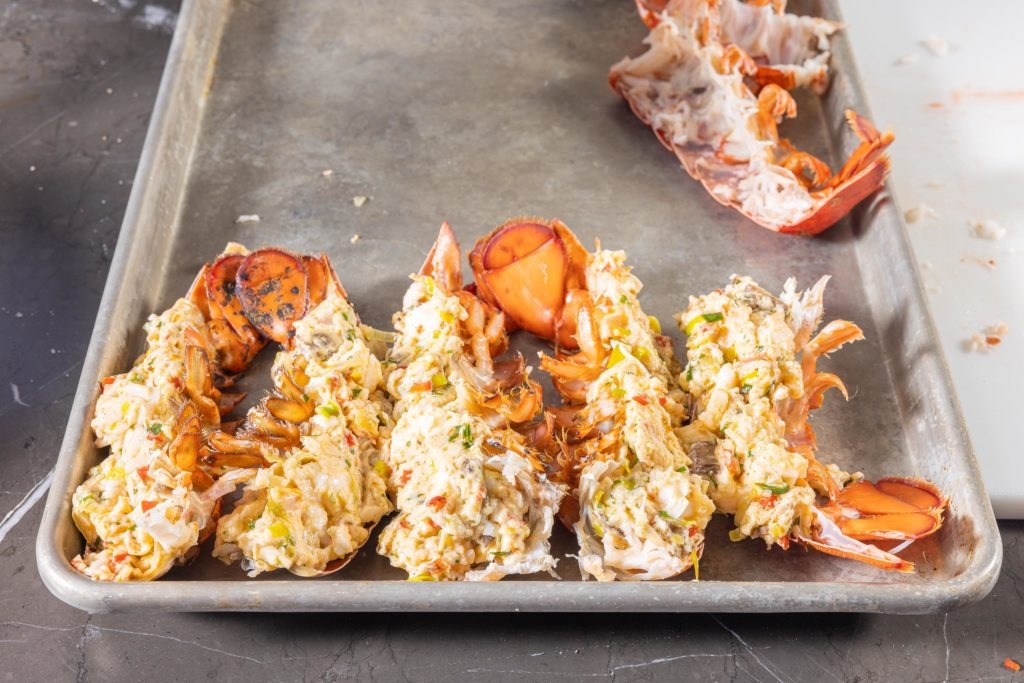 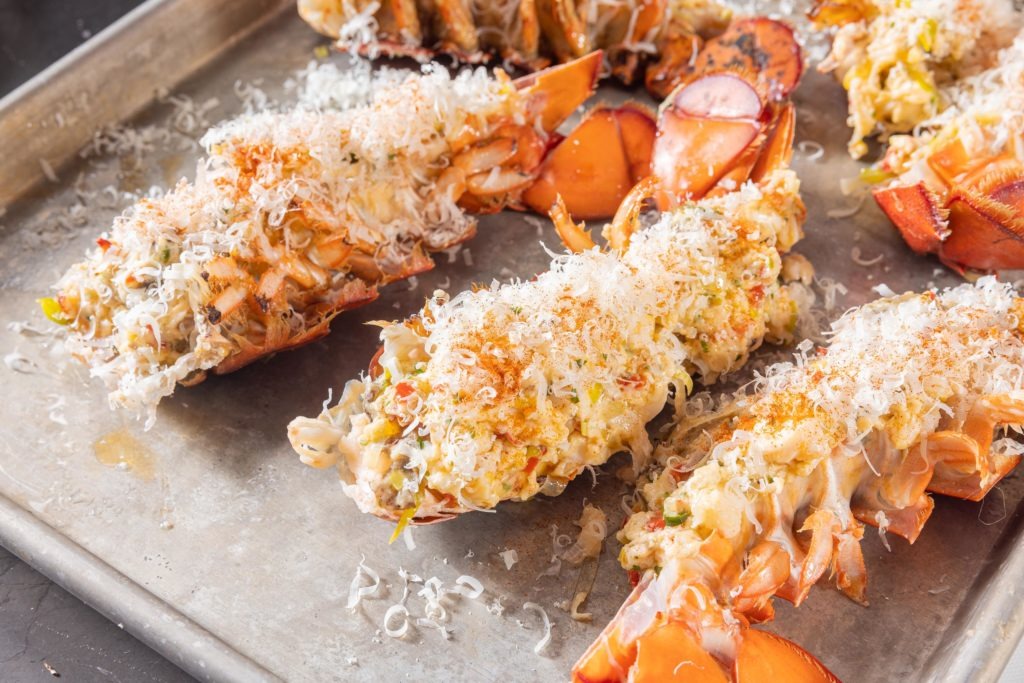 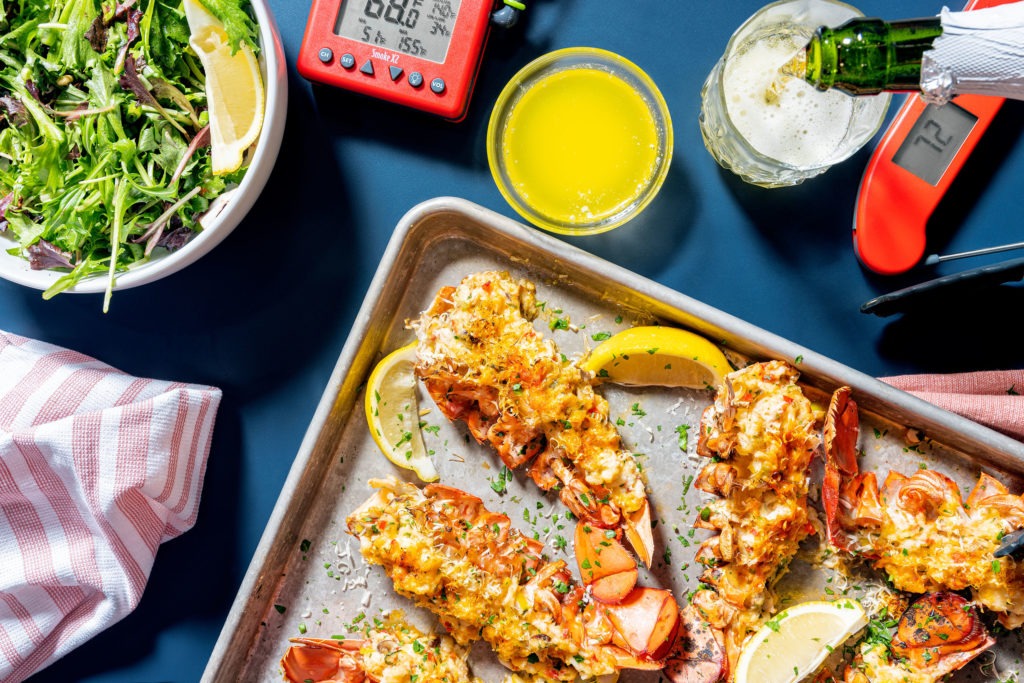