There’s nothing quite so classically ‘winter’ as a roast duck or roast goose. Whether it’s for a holiday dinner or for a cozy Sunday at home, the deep flavor and luxurious, almost beefy texture of a duck hit the spot in these cold, dark months. Plus, duck and goose both boast copious amounts of warm-flavored fat that can (and should) be rendered out for later use on its own.

But there are challenges to getting a perfect waterfowl to the table. No worries! Here, we’ll point you in the right thermal direction to your roast duck or goose up and flying, as it were. We’ll be following the steps laid out on SimplyRecipes.com by the inestimable Hank Shaw, one of the English language’s foremost authors on the art of cooking game. It’s going to be delicious.

The first issue with a duck or a goose (I’m just going to reference the duck from now on, the same concepts that apply throughout this post to duck also apply to goose) is the skin and the fat. Crispy duck skin is a treasure, but it’s hard to achieve with all that glorious subcutaneous fat. We want the fat out and the skin crisp—if we don’t render it properly, the skin stays squidgy and rubbery. What is a cook to do?

First, we need to allow the fat to escape, and that means holes. By using a thick-yet-sharp needle or skewer to poke holes all over the skin of the duck, we create paths of egress for the rendering fat. As we roast the duck, the fat will melt and run out of the holes in the skin, basting the meat as it cooks. There’s one more step to the crispy-skin solution, but we’ll get to that in a bit.

Note two things here. One: don’t poke holes in the meat. We want the fat to render out, but we don’t need the meat all full of holes. Not that much juice would escape from one hole, but making a pincushion of your duck breast isn’t going to make it juicier. Two: You will render a lot of fat out of this bird. 2 Depending on how it was raised, etc. a goose may render enough fat to make moving the pan in which it is roasting a real challenge if the pan is small and/or too shallow. Be warned and be prepared, just in case.

So, the skin problem has been (partially) solved. What about the meat?

Yes, what about the meat? Can we not just cook it? Well, yes, we can, but duck breasts are really best when cooked rare to medium rare, while duck legs are best cooked quite well.

In this wing of waterfowl cookery, readers of this blog will recognize a familiar conundrum. This is a problem that we face when cooking a turkey: light meat from the turkey breast should not be cooked above 157°F (69°C) ane dark meat from its legs is tastiest when cooked to at least 175°F (79°C). For a turkey, there are various solutions to this thermal puzzle, but those solutions just won’t fly when it comes to duck. The gap we want for duck temperatures is well beyond the 18°F we want for turkey. Duck breast wants to be served at 130°F (54°C), so we’re staring down the barrel of a 45°F-plus temperature disparity, and that’s just not going to happen by icing the breasts of the bird. No, stronger measures must be employed. Surgical measures.

To get perfectly done meat on the whole bird, we use a ChefAlarm® set to 125°F (52°C) to probe the breast while cooking. When the breasts reach that critical temperature (verified with a Thermapen®, of course), we pull the duck from the oven and carve out the breasts. Then we put the thermometer probe into one of the thighs and put the now-diminished carcass back into the oven to bring the rest of the meat up to 175°F (79°C). And just like that, we have perfectly cooked breast meat and perfectly cooked legs and wings.

How to cook duck—bringing it all together

Now it may seem that things are not all done. Indeed, the breasts have been sitting tented on the counter for an indeterminate time awaiting the legs, and I said earlier that we’d be talking more about crisping the skin some more. There is one more step: crisping everything in a hot pan.

Heat a pan over medium-high heat and cut the legs and wings from the body of the duck. Place the legs and wing joints skin-side down in the pan and cook until the fat more fully renders and the skin is beautifully browned and crisp. Remove the legs and wings and give the same treatment to the breasts. (This will also reheat them—they will have cooled during the leg cook.) Slice the breasts, cut the drums from the thighs, and serve the whole lot with rich duck gravy, maybe some German-style red cabbage or roasted Brussels sprouts, and certainly gravy made from the extra parts.

With thermal thinking, and some good tools like the Thermapen® and ChefAlarm, landing a platter of perfectly cooked duck or goose on your holiday table is no trouble at all.

An easy way to get perfect skin and perfect meat from a roast duck or goose. Based on the method by Hank Shaw presented at SimplyRecipes.com

Optional but recommended: Root vegetables to roast with the duck 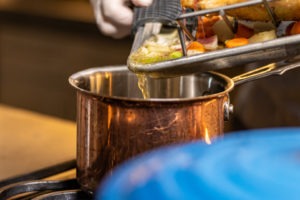