Eclairs are wonderful and we should all be making them with some regularity. Yes, we should. Does that seem out of reach? Like it’s too much to even try? It shouldn’t. They are far too tasty to only eat once a year at some party you had to get dressed up for. Eclairs in slippers, eclairs on the porch, eclairs when you want them.

Making your own is not hard, though it is a bit of a production. And they’re actually quite cheap when you make them yourself, which is even better!

You can read about the culture and history of eclairs elsewhere—and you should, it’s fun. Here, we’re going to focus on the temperatures you need to succeed your first time out the gate with eclairs. Grab your Thermapen® ONE, it’s time to make some pastries.

What are eclairs made of?

Eclairs are made of choux pastry (pronounced shoo) that is filled with a creamy, usually custardy, filling and topped, often with chocolate or ganache. Each of the components is fun to make and none of them are very hard, but the result when you combine them looks like you’ve been taking baking classes in secret.

Choux pastry—what it is and critical temps

Choux pastry (pâte à choux) goes back ages, but gets its name from France, where it was used to make cream puffs. The small, round pastries resembled miniature cabbages and the dough was therefore given the name choux, meaning cabbage. This dough is leavened with steam and the expansion and denaturing of egg proteins, and bakes (or fires) up airy and quite hollow.

Make and cook the initial dough

To make choux pastry, flour is first added to a boiling liquid and then cooked while stirring. As the dough cooks, it forms a ball that you keep stirring around the pan, heating it and drying it out a little. The point of this method is to gelatinize the starches in the flour, so it’s important to cook it until the dough’s internal temperature is at least 175°F (79°C). Use your Thermapen ONE to check the dough temp in a few places once the ball really forms up and stops clinging to the edges of the pot.

Next, eggs are beaten into the dough, but not until the dough cools somewhat. Put the dough in a stand mixer and beat it for a minute or so until the temperature drops to 145°F (63°C). If you add the eggs directly to the hot dough, you may cook the whites. Once cooled, add the eggs one at a time, beating each in completely before adding the next one. Now the dough is ready to put into a piping bag and piped as desired.

As noted above, the leavening of choux pastry comes from steam, so we need a high-heat environment to produce plenty of steam. Starting the pastries at 425°F (218°C) for the first 15 minutes of their baking time will give them the jet fuel they need to puff up. After that, turn the pan of pastries in the oven (for evenness) and finish them at 350°F (177°), baking firm without burning. If you remove them from the oven, they should not collapse.

Note that the dough is very moist and can dry out quickly if piped too early. Don’t pipe the dough and then let it sit out for long before baking, especially if you are in a dry climate. If you have one oven, it’s best to make your first batch, then pipe your second batch and bake it. If you feel your dough lines have dried too much, brush them with some water.

How to make pastry cream—doneness temperature

Pastry cream (crème pâtissière) lies one generation down from Creme Anglaise on the custard tree. It is a simple custard of milk (and/or cream), sugar, and egg yolks with the addition of starch. The starch, which separates pastry cream from Anglaise, stabilizes the egg proteins and makes them less likely to curdle. One can use any starch for the thickening. Cornstarch and flour are the most common, with cornstarch our preferred method.

The standard methods for any custard apply here. Temper the eggs with hot milk. Strain it when it’s done to remove those weird chalaza bits from the eggs. But before we get that far, it’s important to cook it to the right temperature. To gelatinize the starches, coagulate the proteins, and deactivate the starch-destroying enzymes in the eggs we need to bring the custard all the way up to 185°F (85°C). (A super-accurate instant-read thermometer like Thermapen ONE is perfect for this task.)

To stop the cooking, plunge the bottom of the pot into a prepared ice bath and stir it once or twice.

You can use just about any ganache recipe for your topping, but it’s best with rather dark chocolate (milk chocolate tastes bland in this application), but if you want it to be nice and shiny, you’ll need to include a little bit of corn syrup, which gives it a beautiful sheen. The recipe we’ve included below has a touch of salt which wakes the flavor up in a beautiful way.

There is nothing particularly difficult about making eclairs. You can make them in an evening, or you can make the parts in advance and assemble them right before serving. There are a lot of steps between the three components, but they are all achievable, especially if you follow the critical temperatures we’ve outlined for you here. Make a batch, eat them all like you’ve always wanted to, then make another batch and take some to your friends. They’re amazing and you’ll love them. So will your friends. Enjoy! 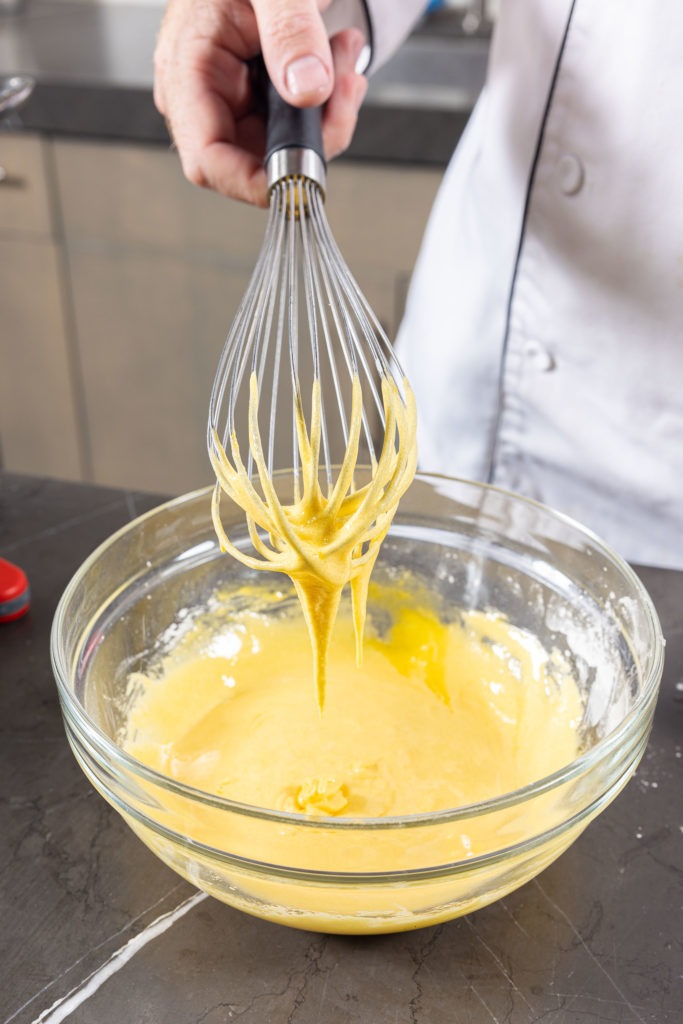 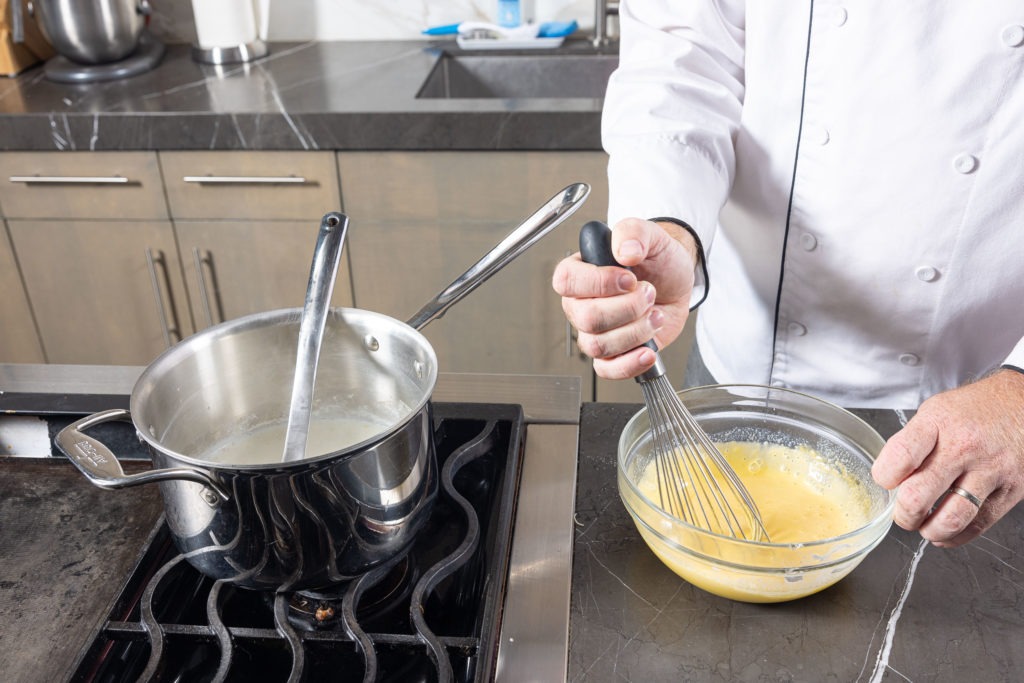 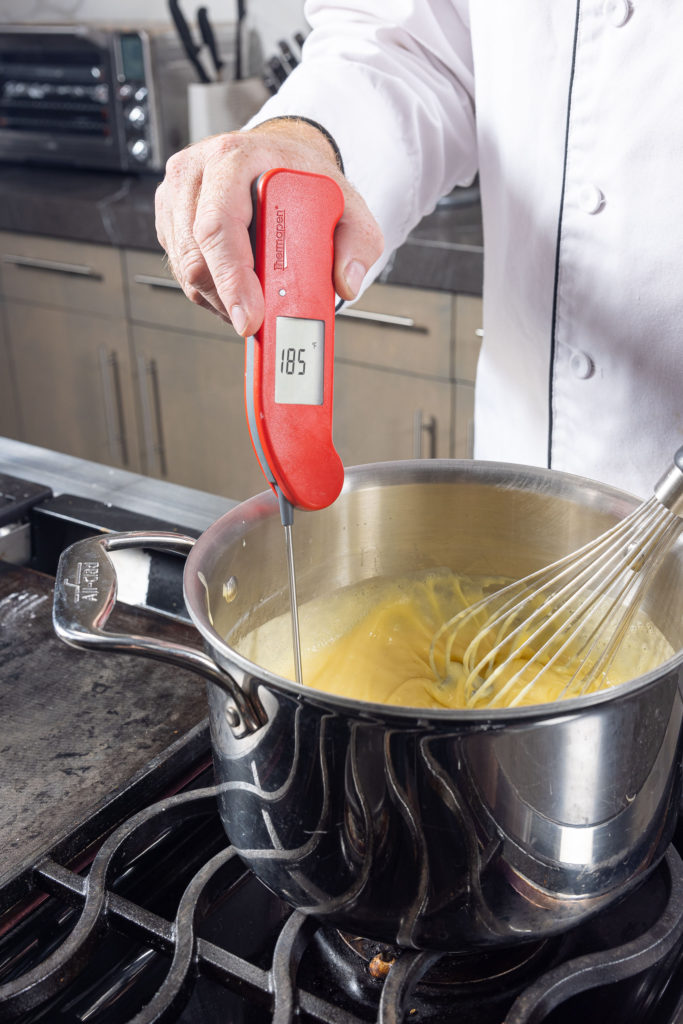 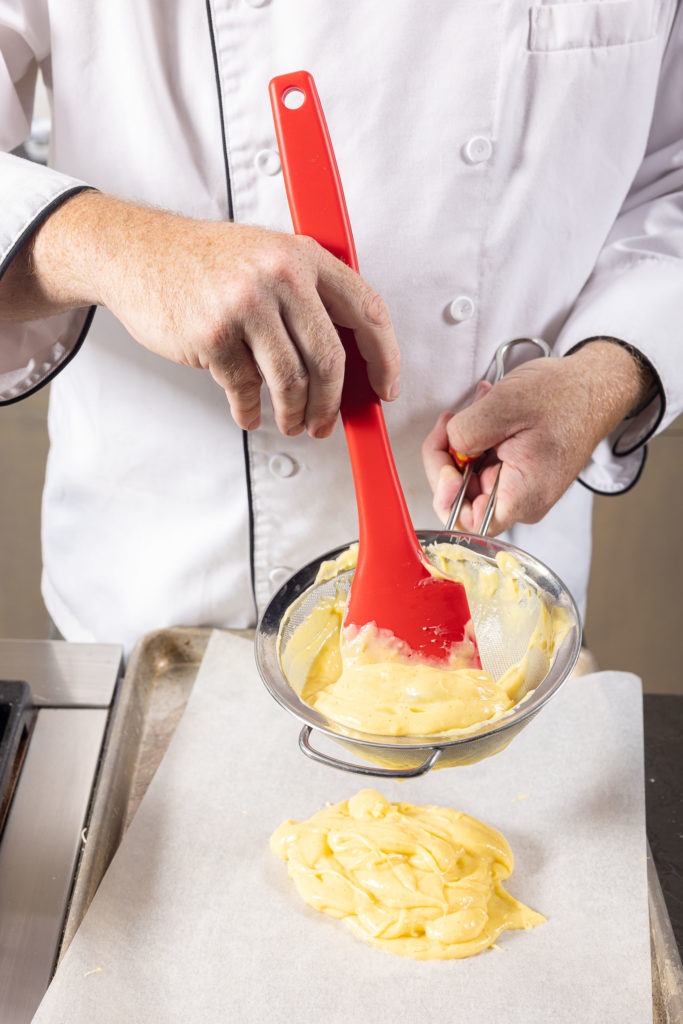 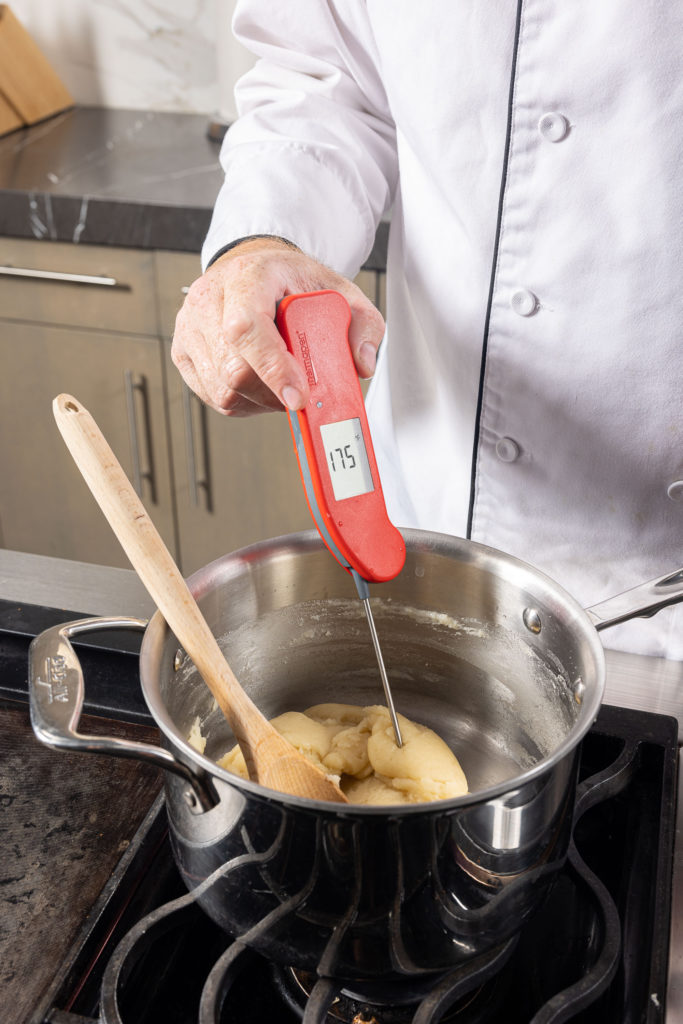 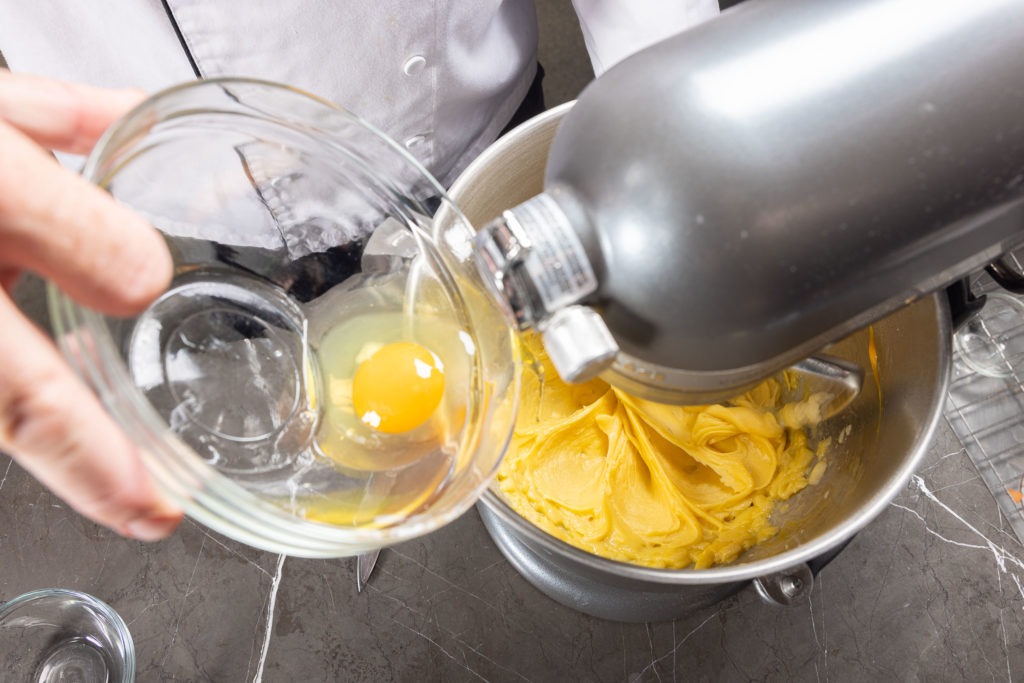 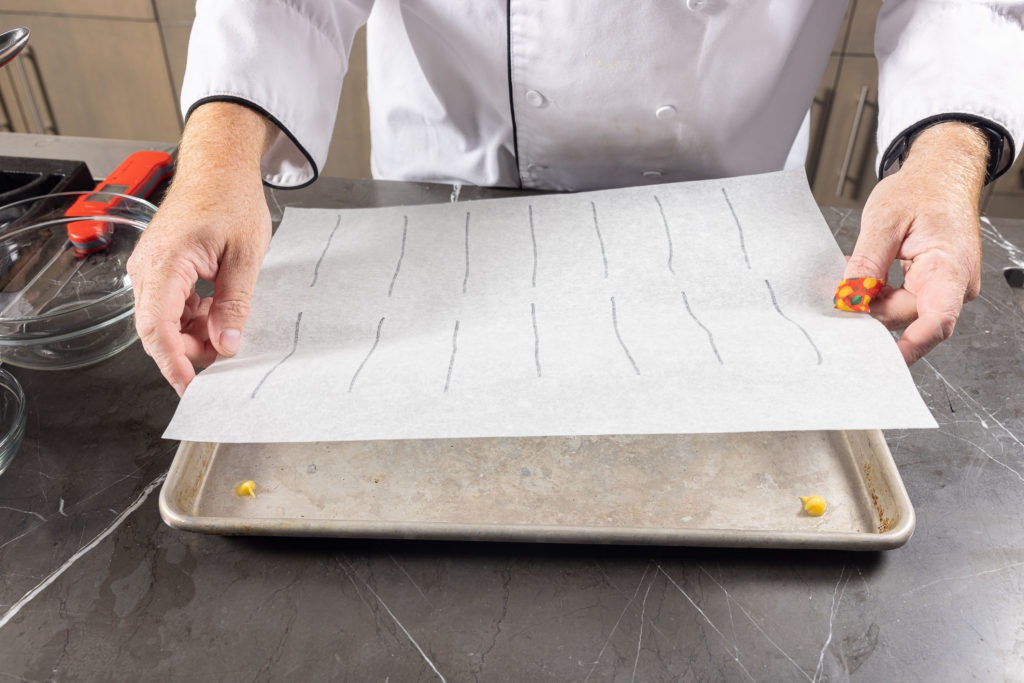 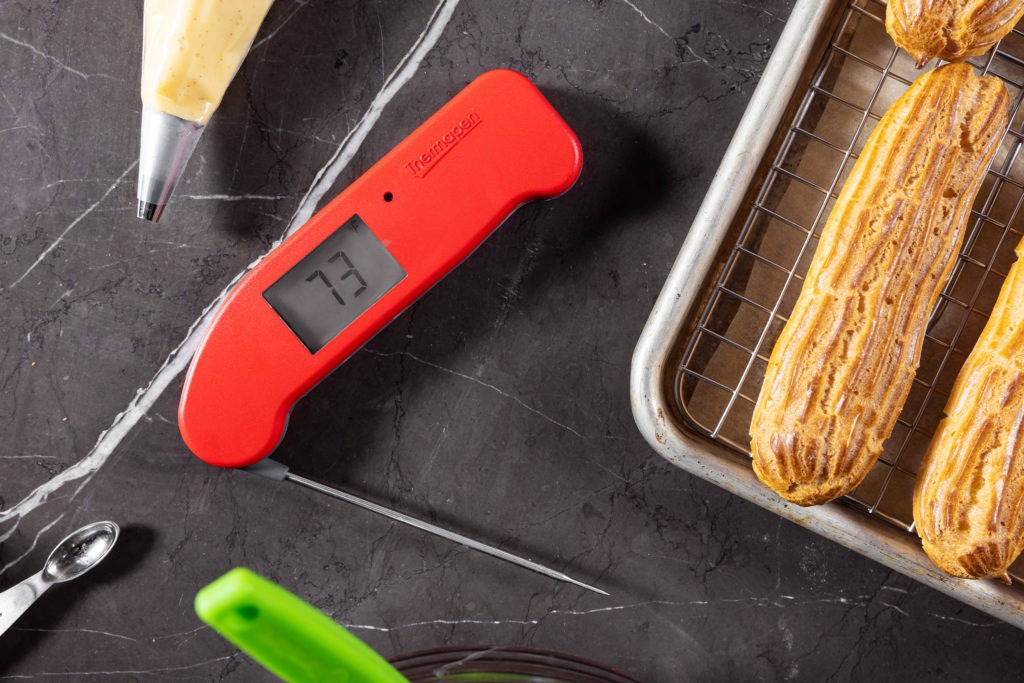 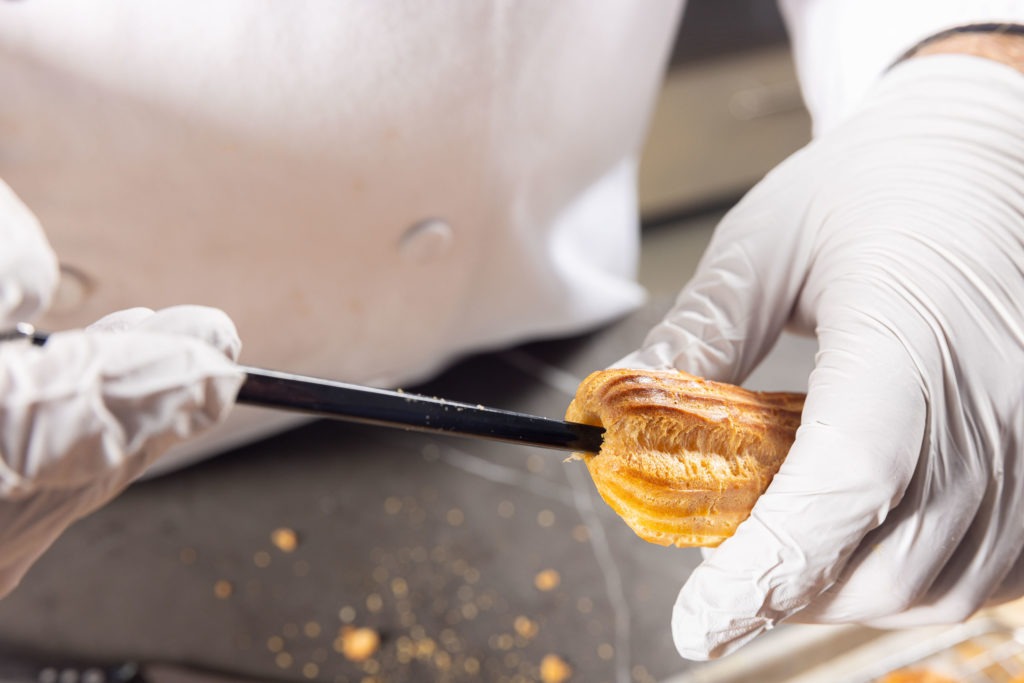 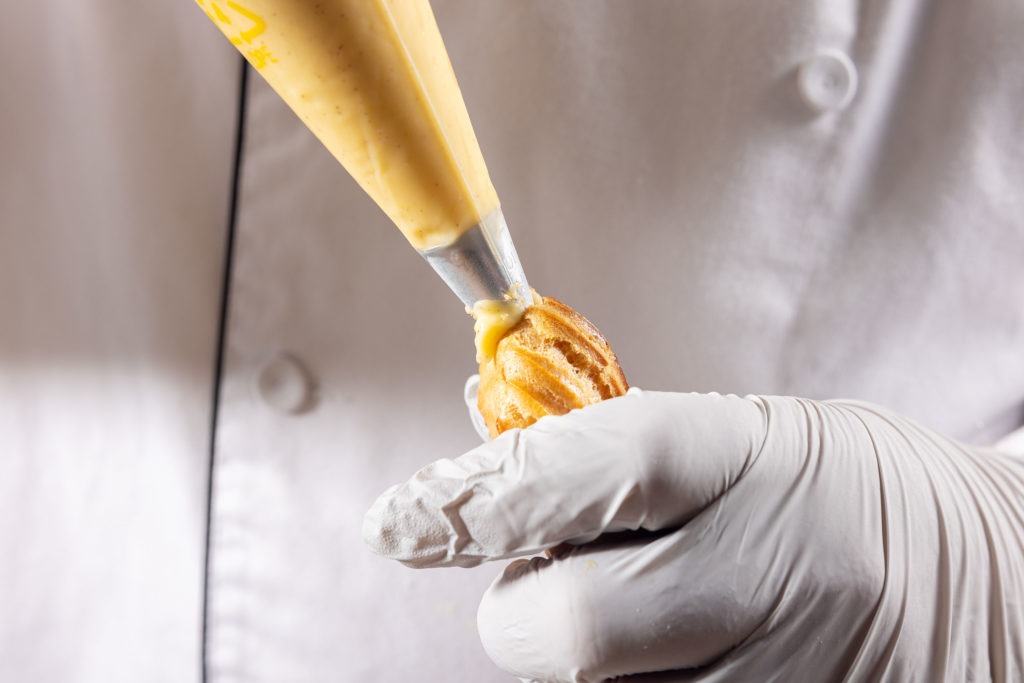 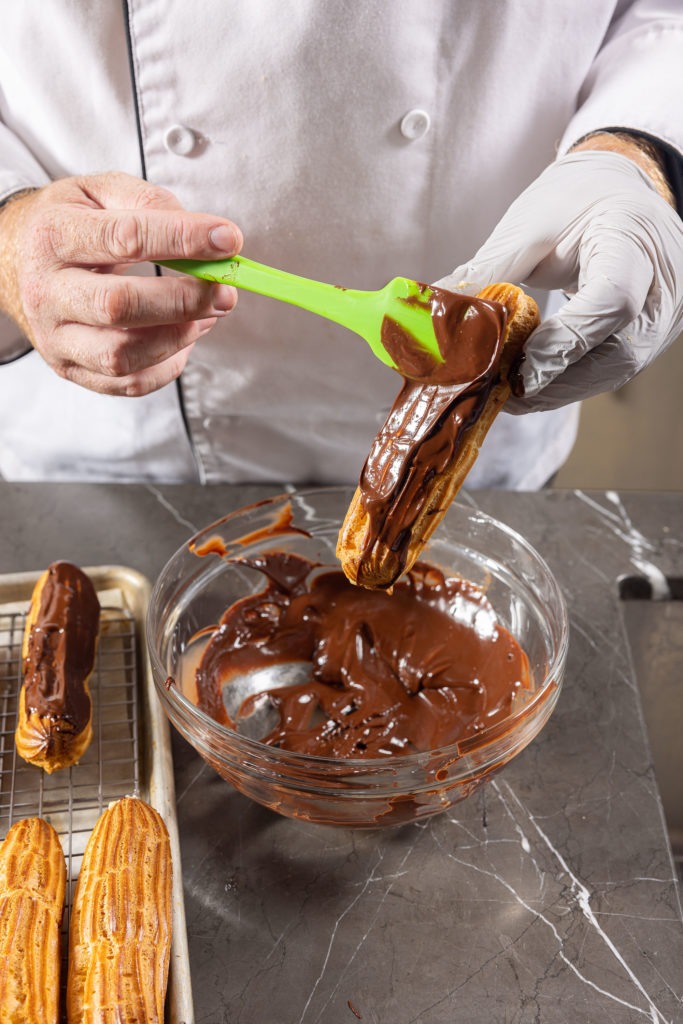 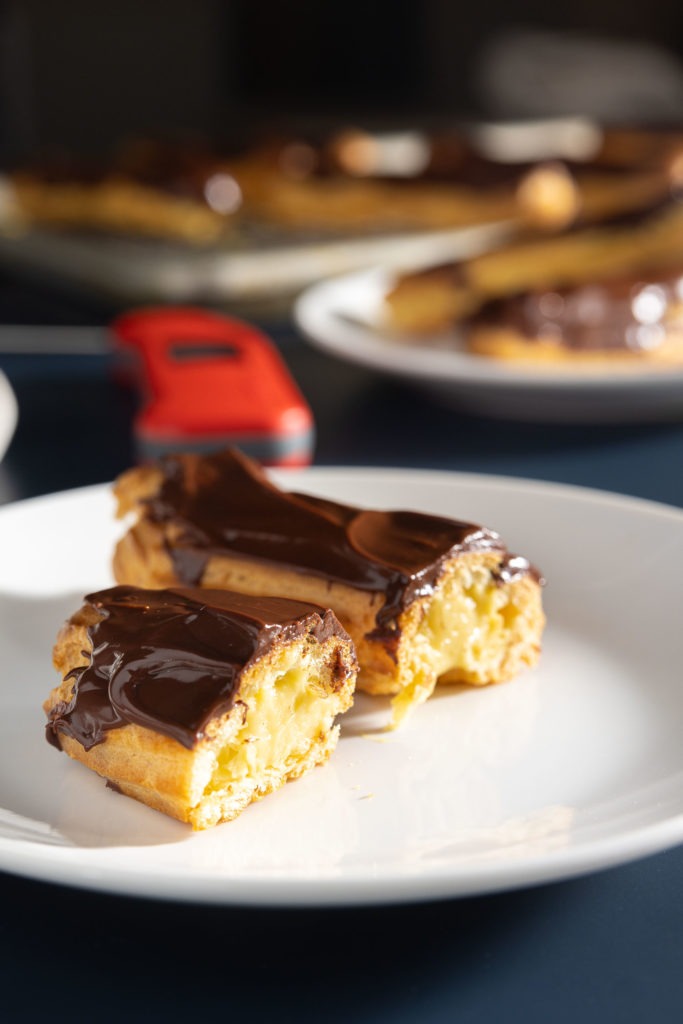