Filet mignon is definitely one of the most popular cuts. That absolute tenderness, that uninterruptedness of the meaty enjoyment is just so good. There is but one failing for a filet, in our book, and that is that it doesn’t taste like a ribeye.

A ribeye is without question one of the bare-tastiest cuts of beef, especially when grilled. The smell alone of a grilled ribeye is enough to make me weak in the knees. Its great failing, though, is anatomy. There’s silverskin in there, there are gristle and huge seams of fat that not everyone loves. If only it were a solid block of uninterrupted meat like the filet…

Of course, you can see where this is going. The ribeye cap steak (also called the spinalis steak) possesses the best strengths of a filet and a ribeye, with neither of their failings. It may well be the perfect steak. Well, it may be if you cook it perfectly, to just the right temperature, which is what we want to talk about here today.

What is a spinalis steak?

On a ribeye steak there are two muscles. The outer muscle that surrounds nearly half of the ribeye is a muscle known as the spinalis dorsi. It is often very well marbled, and has a bit of a softer, almost spongy texture.

Ribeye cap steaks (a synonym for spinalis steaks) are traditionally made by removing the cap from a rib loin, rolling it tightly so that the length of the cylinder is parallel with the grain of the meat, tying it off in several sections, and cutting small steaks out of that roll.

The steaks obtained by rolling the loin this way are small, about the size of a petit filet, and they are kind of pinwheel-like. If you can find them (pre-tied) at a store, I recommend buying them. Or you may be able to find a cap sold by itself and tie that yourself. But it is a rare find. In all likelihood, you’ll end up trimming the cap off a full ribeye roast and making the cap steaks yourself—which is admittedly not a cheap proposition. But it is also by no means a waste. You can cook the loin portion separately as a roast for guests, who will thank you gratefully, and then you can keep the spinalis steaks for yourself. Trust me, you won’t want to share them beyond your family and, maybe, your closest friend.

How do I cook spinalis steak?

I usually prefer a pan sear for steaks over grilling. But when it comes to cuts from the rib loin, grilling is just so good. The way the fat and meat crisp and char is nothing shy of alchemical magic. So, yes, grill these steaks. And because this is a steak you will most likely have paid heavily for (a loin off of which to cut them isn’t cheap), you want to make absolutely sure that you aren’t overcooking them.

For me, that means reverse searing the steaks. To cook our spinalis steaks, we set up a charcoal grill for two-zone cooking with the burning coals on one side of the grill only. We cooked the (salt-and-pepper-seasoned) steaks over indirect heat—at about 325°F (163°C)—with a probe attached to the Smoke X2™. We set the high-temp alarm for 100°F (38°C) so that we’d have plenty of thermal space for searing without overcooking. When the alarm sounded, we moved the steaks to the grates directly over the coals and seared them for a few minutes on each side until a Thermapen® inserted into the center read 125–130°F (52–54°C). Then we took them from heat and rested them for a few minutes.

The results were astounding. The meat was beautiful, red, juicy, as you’d expect when using proper temperature monitoring and control, and it had a salty-peppery crust that was well kissed by flame and char so that the deep, hidden flavors of the ribeye came out in full array. I have eaten many, many steaks in my life, and here at ThermoWorks I have eaten many of the better steaks that I have had. It is not an exaggeration to say that this steak was easily one of the very best steaks I have ever eaten.

If you are thinking of serving a prime rib to your family this coming holiday season—or ever, for that matter—consider making these steaks from the rib cap. They end up small, but extremely satisfying. Temp them with a Smoke X and a Thermapen®, and I guarantee you’ll love the results.

A guide to the very best steak you’re likely to have. 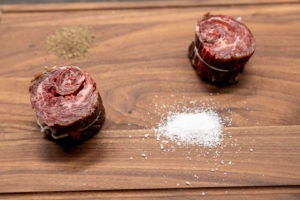 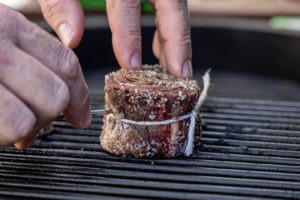 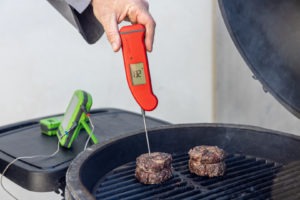