Tailgating season is a joy. Out in the crisp autumn air with friends, cooking, eating, cheering—what more could you ask for? Well, for one thing, you could ask for your team to win.

Sadly, that’s not always the case. In fact, being a fan of some teams leaves you with a “championship-when-pigs-fly” feeling. If that’s the case for you, we have a recipe that might make you feel a little better: pig wings!

In seriousness, though, this recipe is good for winning teams as well as losing ones, and in fact, doesn’t even need to be attached to a tailgate at all. But they do need to be cooked properly. Here, we’ll give you the temps you need, as well as an amazing sauce, to make pig wings that will fly right off the plate.

What are pig wings?

Pig wings® (also known as pork wings, and originally named and produced by Pioneer Meats) are partially deboned, trimmed pork shanks that are smoke-braised until very tender. In process of cooking, the meat pulls back, revealing a portion of the bone that can be held, allowing you to eat the meat off of it. Eating them feels much like eating a chicken wing, only meatier.

The illusion of chicken-wing-ness is aided by the sauce. Yes, you could go straight BBQ on these, but making a sauce that is more wing-themed gives the dish a familiar feel that is quite welcome. The sauce we’ll be making, based on the directions from Chud’s BBQ, is about two parts wing sauce, one part pork-mop sauce, and 10 parts freaking delicious.

The wings themselves are not readily available, but you can certainly order them. We got ours from Porter Road, but you can probably get pork shanks from any good butcher, and even have them cut down to the right size and shape. You want most of the silver skin off, obviously, and you only need one bone in there to hold on to. (There are two bones in a whole shank. The larger one needs to be removed.) If your butcher can find you shanks, but doesn’t know how to butcher them up into pig wings, look at Chud’s tutorial—he does a fine job of teaching it.

The pork shank is chock full of tough connective tissue, and in classical (non-BBQ) cookery, they are almost always braised to melt that collagen into gelatin. In BBQ, we smoke-braise.

Smoke-braising means we will do an initial smoke cycle to set bark, add smoke flavor, and get a nice smoke ring. Then we braise the meat, covered, in a shallow pool of liquid. The high-humidity environment that we thus create bathes the pork in even heat. The humidity also prevents evaporative cooling, skipping over the stall and saving you time.

In this case, we smoked them at 300°F (149°C), using Smoke X2™ and Billows™ BBQ Control Fan to monitor and adjust the temperatures. We turned them every 20 minutes and started mopping them with the sauce after an hour. After two hours, we put them in a pan with the sauce (more on the sauce below), covered it, stuck a probe in through the foil, and cooked them to an internal temp of 200°F (93°C). We verified that temp with our Thermapen® ONE, which not only told us that the temp was right, but also gave us a feeling for the tenderness. They came out tender, yet not falling off the bone. (That’s what we want, really, because we ant to be able to pick them up and take bites.)

As noted above, the meat had pulled back from the bone enough to give us a nice handle to pick them up with, and they were a joy to eat.

As noted above, a sauce that straddles chicken wings and classic pork BBQ is a great way to go on this cook. It starts with onion sauteed in a lot of butter, then adds hot sauce (butter + hot sauce = wing sauce), but goes further. Worcestershire sauce, lemon juice, apple cider vinegar, beer, and ground mustard make up the moppish component—by the time you’re done cooking it you’ll want to put it on everything. The smell and the flavor are incredible, and it does lovely things for the meat as it cooks. I want it for chicken wings, too!

Eating pork wings is very reminiscent of eating chicken wings, but they are meatier, more substantial, and more filling. Mopped, smoked, braised to temp—they are perfect. For a tailgate—whether your team is the “win-it-every-year” kind or the “when-pigs-fly” kind—or for a fun weekend meal, you can’t go wrong here. Give them a try, I think you’ll like them.

Based on the method from Chud’s BBQ 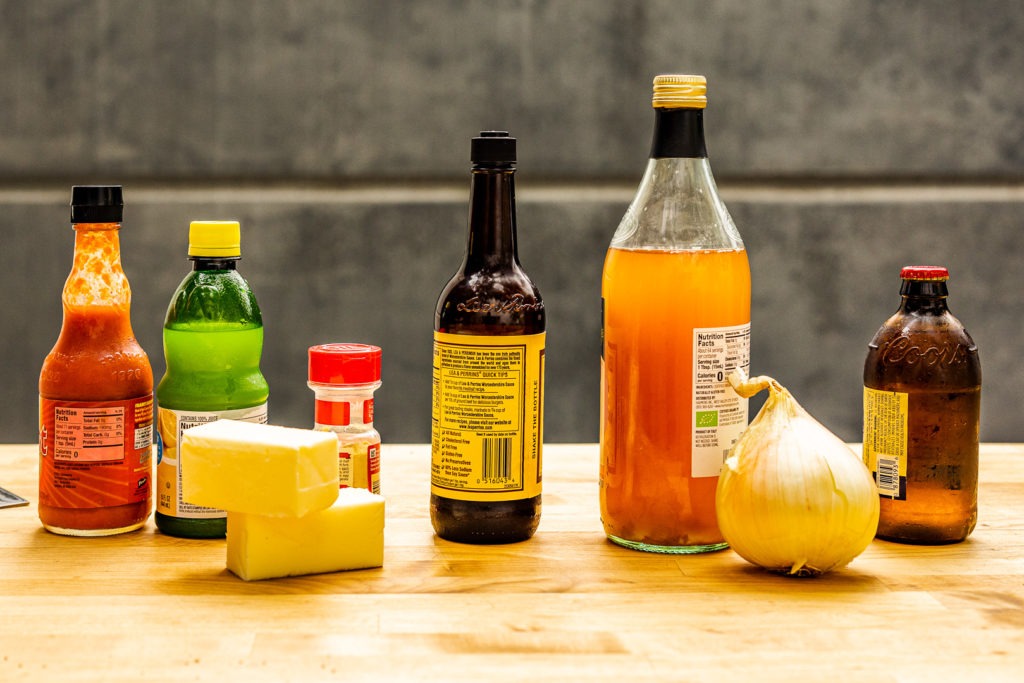 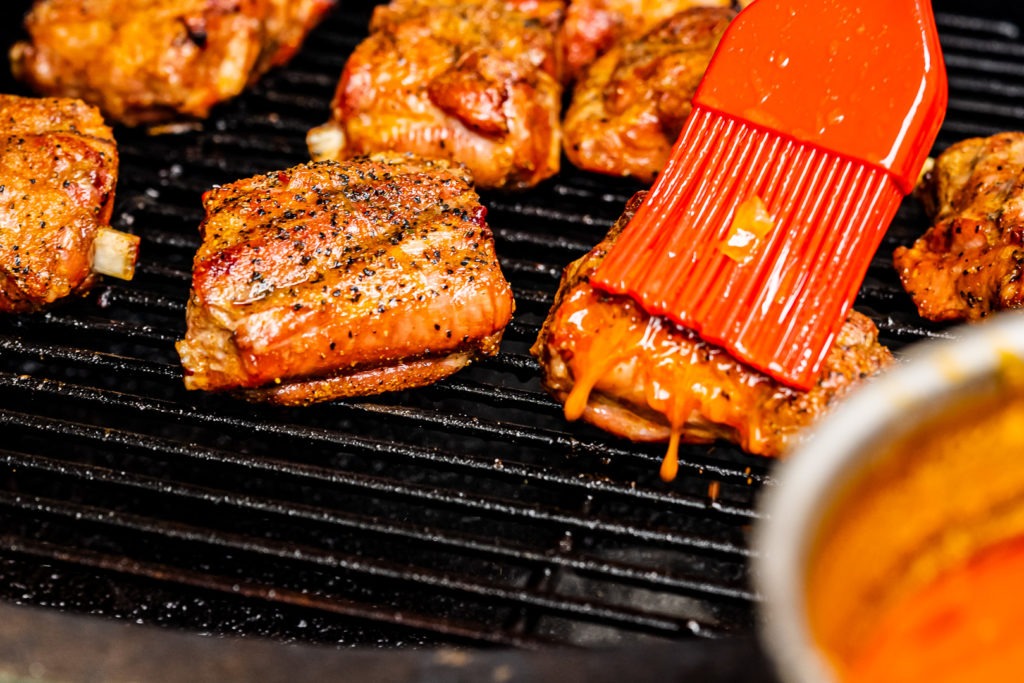 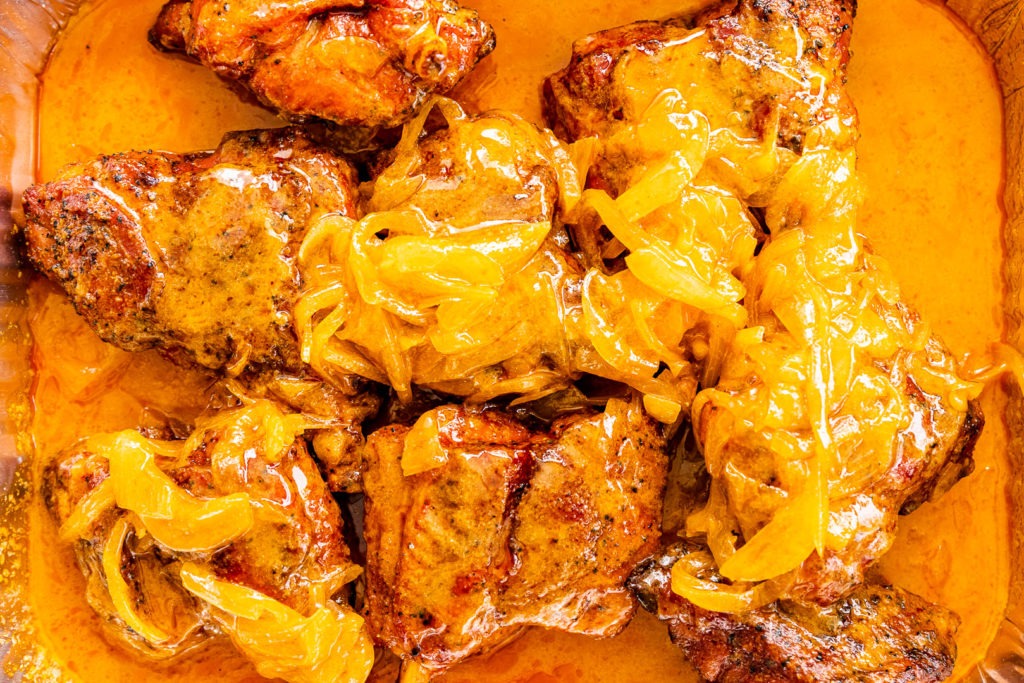 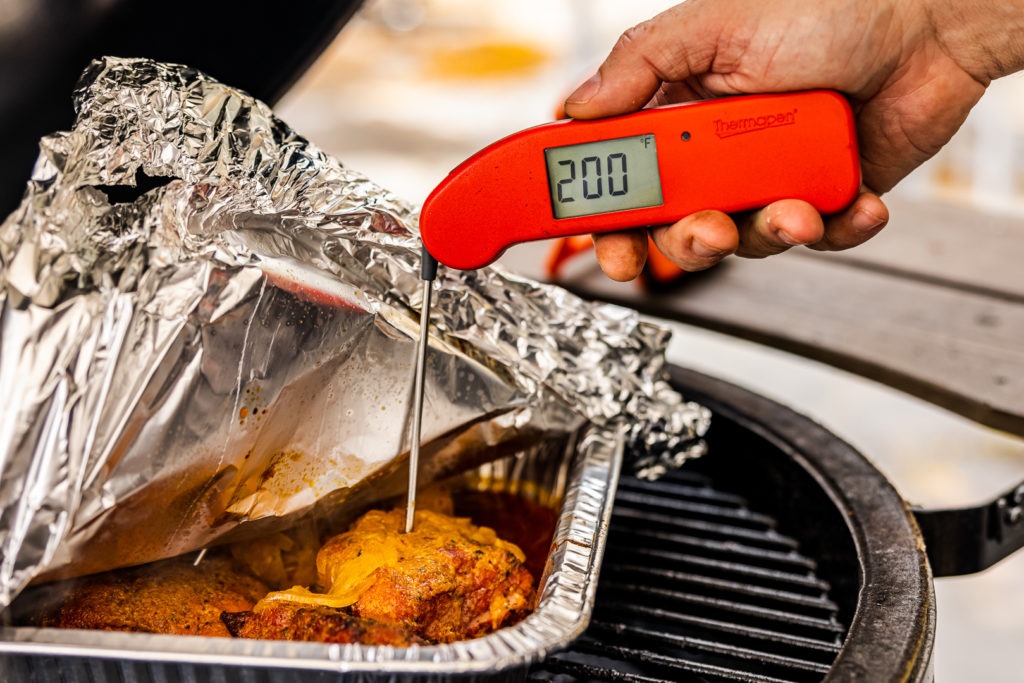